Use Words to Shape Your Designs with Three Distinct Tools 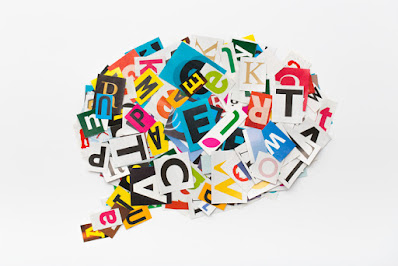 Words and messages are communicated in so many ways – through vocabulary selection, images, tone or personality, and even through design.

The raw material that words represent is more than just semantics, and graphic artists have many options for exploring the power and symbolism of unique words in design.

Here are three ways you can weave words into the visual elements of your design.

What does this look like in design? Here are several ideas:

-- A seafood café restaurant might feature server aprons sporting a wacky fish (wearing a top hat) with the word “SoFISHticated” sprawled below.

-- Well-known phrases can be changed to fit the message of the brand. For example, the bike manufacturer Salomon created a logo that changed the phrase “blood, sweat, and tears” to “Mud, Sweat, & Gear.” This message links the company's core purpose – making mountain bikes – to a memorable, motivating catchphrase.

-- Words puns can be created by substituting characters for sections of a word. Designer Wolff Olins created a word pun using the characters “Q8” to represent the oil-rich country of Kuwait.

Visual (or graphological) puns do not use phonetic writing.

Instead, visual puns create a play on words through imagery, graphics, or logos. Examples include:

-- An image in the fork in the middle of two parting streets (symbolizing an impending decision or a fork in the road).

-- A symbol can be used to replace a whole word, like “I [HEART] NY” or the character “He” with a box outline around it (to symbolize the periodic element of helium).

-- Making subtle tweaks to logos to add visual effect. Rebel, a rugged Australian sporting goods company, turned the second “e” backward in their company name. Or the logo for Poison Spider Bicycles depicts the venomous red section of its spider as a replica of a gritty bike chain.

A rebus represents words in the form of pictures or symbols, often presented as a riddle.

Think of the last time you puzzled over an obscure personalized license plate on the rear of the car in front of you. Was it hard to look away? People love to decipher codes, and using a rebus can stop people in their tracks, causing them to slow down, think, or smile!

Here are some clever ways the rebus has been put to work in marketing:

-- IBM created a poster with three images to represent its name: a cartoon eye, a colorful honeybee, and a playfully sketched letter M.

When IKEA wanted to help American customers grasp their company's correct pronunciation, they created a rebus design featuring a cartoon eye, followed by a house key and the text phrase “ah!”

-- The East End Brewing Company chose to market its energizing coffee porter with this eye-opening rebus: a cartoon eye and a classic handheld bottle opener

The creative use of language can help precisely position an idea, company, or product in unique and refreshing ways. Tailor your message toward a target audience and play with words until you find just the right fit!

Need some fresh ideas? Contact us today to get started! 516-561-1468 or FOR MORE INFORMATION ON ANY OF OUR MARKETING PRODUCTS GO TO: www.printcafeli.com